A fusion between a classic strategy battle game and a collectible card game.

Originally released on PC, The Trouble with Robots has been adapted for mobile devices - including a complete redesign of the in-game artwork. Summon a cast of fantasy creatures including centaurs, trolls, dwarves, and more as they try to defend their homeland from the evil robot invasion. As you progress through the game more spells and creatures can be called upon using powerful cards! You can apply direct damage, buff your allies, weaken your foes, and come up with any tactic you choose.

Collect the most powerful cards and create the ultimate deck to dominate on the battlefield. Become a part of the simultaneously epic and hilarious tale as two opposing forces clash in all out war!

Can you handle Limited Mode?

The Trouble With Robots story can be played in 3 standard difficulties of Easy, Medium, and Hard. You might think you're a hotshot because you finally beat the game and all the challenge modes - but are you ready for Limited Mode?

Once you've beaten the Trouble With Robots story you can either continue on with the Megamort Expansion, or replay the full game keeping all your collected cards in Limited Mode!

Limited Mode cripples the player by locking half of their available cards, forcing them to build unusual decks and come up with new combinations to play! Each level locks and unlocks different cards to keep you from sticking to just a few strategies!

Limited Mode will be entirely optional upon game completion, players who wish to replay at a higher difficulty or simply replay with their collected cards they can!

You'll need to be creative to beat TWR on some of the hardest difficulties!

Trouble With Robots has over 19 primary levels, 6 challenge levels, and 8 level expansions - the completion of each level unlocks tons of rewards that will help you along your way.

'Elf and Safety' is one of the introductory levels in Trouble With Robots, and will be your first glance into the magical, and oppressive, world. Join the villagers of Trollworth, along with their elven and centaur comrades, as they are forced to leave the safety of their forest home to battle their mechanical overlords!

The mountain-themed levels will be the first time we see the Troll summon in action, and start to use the dwarves in battle! As you progress through the game levels are unlocked you will earn 'Stars', the in-game currency, and new cards along with them!

The Trouble With Robots adventure takes you from the forest, surrounded by elves and centaurs, to the robot-ruled city as you fight alongside your magical companions for freedom - each level featuring unique art that captures the look and feel of the inhabitants as well as the world around them!

More TWR Summons get a Facelift!

As the Anti-Robot Resistance gathers forces and makes their way to the Robots' doorstep we finally get to see what thy really have up their sleeve! From lasers to battering rams... let's just say you have your work cut out for you.

You'll be introduced to tons of new Robots in their home levels, and you'll be able to summon a few of your own too! You will need to fight your way through the city, but it doesn't end there...

Every card brings something different to the battlefield, your job is to find the ones that fit your personal strategy! 'Stampede' summons 3 Centaurs, but at the cost of discarding a card from your hand while 'Urban Bruisers' summons 2 trolls with only 10% of their health!

Will you take 'Defiant Guard', summoning two dwarfs and giving your army temporary invulnerability, using the timing to protect your army from heavy fire?

'Gather Support', summoning more peasants each time it is played, has incredible reinforcement potential but will it work with your deck's composition?

The Area of Effect spells are great for damaging lots of units at once, but which units and how they are damaged is where you'll need to start experimenting!

Targeted spells like 'Fireball' and 'Boulder Crash' are much better for burst damage in a small area, swiftly dealing with high priority enemy units. Of course you open yourself up to killing friendly units if they stumble into your targeted area, so watch where you point that thing!

Abilities like 'Lightning Strike' and 'Corrosion' apply to all enemies on the battlefield, and have higher overall damage, but at the cost of being unable to target specific units.

Spend as much time as you want on your deck, part of the Trouble With Robots fun is experimenting with the many possibilities! 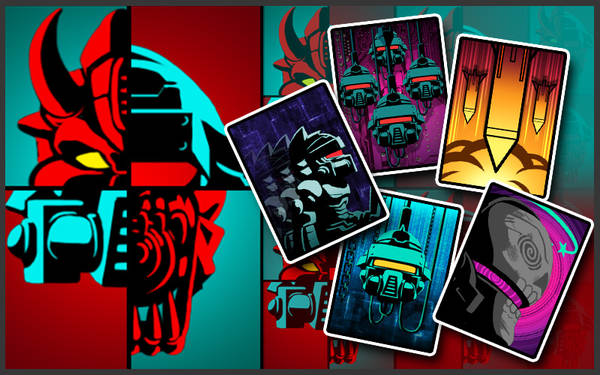 As the story progresses you'll be able to earn and use Robotic cards! Summon a legion of metal soldiers to fight for your cause! 'Upgrade' and 'Droid' are solid cards on their own, but holding on to 'Upgrade' makes playing 'Droid' a big deal. 'Slow Motion' is an obvious advantage for your ranged units, and even makes aiming 'Rocket Drop' easier too!

Re-wire is always a favorite, so long as the unit has less than 100HP you can take it over!

Upgrade
Summon 4 Batonbots.
While in hand, other cards that summon Batonbots summon Compliance Officers instead.

Rocket Drop
Fires a rocket in large area, plus three more each time it is played.

Rewire
Gain control of an enemy target with 100HP or less.

These are the Healing and Support cards, and depending on your card-draw luck you'll need to think about when you use them! 'Heal' and 'Hope Charm' are your first and most basic healing options - when what you really need is a big heal. Hope Charm has the added benefit of having multiple charges, but heals for a set amount.

Turn the Tide and Energize create follow-up options for the player. Energize removes the tight Power restrictions - meaning the size of your army is only limited by your held cards! Turn the Tide's effect is quite titular, dealing damage to the enemy while healing your wounded.

Deal 20DMG to enemies and restore 20HP to allies in a targeted area. Effect is then applied to to all units in play.

Heal all friendly units for 30HP, Power recharges faster until a non-summon card is played.